We finally made it to the first Sunday of the new liturgical year, the first Sunday using the new translation of the missal.  My impression? It doesn't really seem to me that anything has particularly changed.  Yes, the wording is a little different, but the Mass is the same.

I happened to go to the cathedral for Mass this morning.  I was taken by surprise when the bishop was the celebrant.  I know it makes sense that he should be there, but I've been to Mass there plenty of times, and I think this is the first time I've seen him there.  One of the things that I love about going to a Mass with a bishop or a cardinal is that there is just a little more ceremony to certain parts of the Mass.  I love this because it is a respect that we owe to their office as bishop.  I don't feel that I know much about the bishop here, but I know that when he was ordained as a bishop, other bishops laid their hands on him, as bishops before them had laid their hands them, and on down the line back to the early Church fathers and to the apostles themselves.  For that, I will gladly give him honor and respect and pray for him, though I know little else about him.

The other thing that I love about going to a Mass with a bishop or a cardinal (or even the pope, though I've never been to a Mass with the pope) is that it is still the same Mass.  He is not so important that he gets to choose his own readings or his own way of doing things.  In fact, the only way that he can truly fulfill the office he has been given to guard and protect the Church, keeping her teachings safe so they can be handed on, is to to follow each of the rules of the liturgy, to say the Mass in unity with the pope, with all the priests in his diocese and with Catholics around the world.

I think what I love about that is that it reminds me again that the Mass and the teachings of the Church are not ours to decide as Catholics.  They are what has been given to us, they are bigger than us- all of us- from the people in the pews up to the pope himself.

The changes in the wording of the Mass, to me, are an example of thoughtful and prayerful study of how we can most accurately pass on and live out the teachings that have been given to us.
Posted by Catholic Mutt at 12:13 PM 4 comments:

Oh, man.  What to say about the holidays.

It has already started, these schizo, crazy holidays.  It is not because I am busy.  As I have mentioned before, the busier everyone else is, the less busy I am through the holidays.  No, the schizo part for me is how much I love them, and how much I can't handle them.

For example, I had so much fun on Thanksgiving.  It was great!  And then I had to get back in the car by myself.

When I am alone, the fact of being alone is intensified and magnified.  When I am with people, I am even more aware of the fact that I am by myself.

Commercials are everywhere for those special gifts to buy those special people in your life.  There are all sorts of fun activities that are advertised as fun things to do with the whole family.

People chatting about how busy they are reminds me of how not busy I am. (The reason that makes me sad is that I don't have more reason to be busy.  I do like the part about how relaxing it can be.)

On the holiday itself even Mass itself can be a really hard place to be.  Mass, which is normally my refuge, becomes a place that I can't wait to run away from.  Looking out at the sea of families is not easy.

I look forward to the season.  This year, I have a cute little place that feels like home and that I can't wait to decorate. I have lots of people that are still wanting to hike and climb, and there are plenty of people to visit and see.  I know the pain will come, too, but there's nothing I can do about it besides accept it when it comes, use it as a reminder to pray for everyone who struggles at this time of year, and beg God for yet another time that can this please be the last Christmas season that I have to be alone.*

Okay, enough of being a downer.  My goal is not to be all depressing on the blog this year.  That goal can start for Advent in a couple of hours.

*For the record, by the grace of God, I have never had to be actually alone on the actual holidays, other than alone in the crowd.  But I think you know what I mean.
Posted by Catholic Mutt at 11:21 PM 7 comments:

I hope you've had a wonderful holiday!  I was so ready for the day off; I had a class over the weekend, so this is my first real day off since a week ago Sunday.  The day started a little too early, but other than that, it's been about all you could want in a Thanksgiving. The reason for the early start? My smoke detector decided to spaz out.  Not the annoying "I need a new battery" chirp, but the ear splitting shriek that there's something wrong.  Only I could not find a single thing wrong with anything.  The battery's back in and no more noise (and the house didn't burn down while I was gone), so hopefully it's an isolated incident.  In the spirit of the day, I'm thankful to know that it works well enough to wake you up and get you out of bed before you even know you're up.  I'm also thankful that there wasn't anything wrong.
After Mass, the rest of the day was spent with friends.  I rarely so much as eat at the table, so I was loving the place settings that she had. 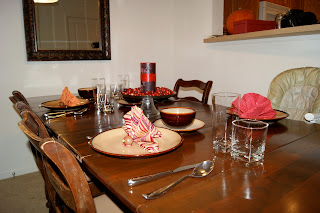 I had a hard time deciding which I liked more, the simple centerpiece (loved the light off the cranberries, as well as the colors): 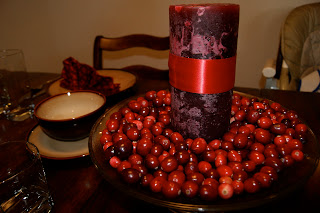 Or the fun turkeys: 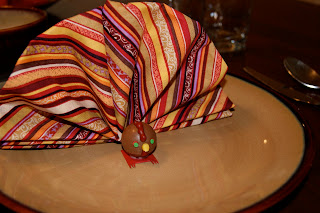 Aren't they cute?  They are also known as peacocks, according to her two-year-old. Speaking of turkeys, the little turkey saw me with the camera and decided to start taking pictures of his own: 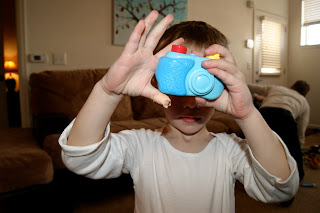 I wanted to get a picture of all the food, but I forgot.  It was so much fun to be able to plan all the dishes that we wanted to see for Thanksgiving, and luckily we all wanted the same traditional foods; turkey, stuffing, cranberry salad, green bean casserole, mashed potatoes, sweet potatoes, homemade rolls and pumpkin pie.  Did you catch that there were only 4 of us? Yeah, we did not run out of food.
Well, that was me.  What were you up to for Thanksgiving?
Posted by Catholic Mutt at 10:21 PM 3 comments:

"Homeboy" Is Not Another Name for Jesus

I don't have time right now to finish my series on the Mass, which I was hoping to finish before Advent, but I will finish it whenever I get a chance.  In the meantime, I've been thinking some about the names of Jesus.  It is the topic that I have to present for RCIA next week.  I am so prepared, that I haven't even gotten to the point of looking up the actual names.  Other than it will obviously be important to discuss "Jesus" (Yeshua, "God saves") and Christ (Greek) or Messiah (Hebrew), "Anointed".

To be perfectly honest, it's taken me quite some time to even wrap my head around the idea of how a discussion of the names of Jesus is important to people preparing to enter the Catholic Church.  Not that I want to belittle it, but really?  The names of Jesus compared to topics like the Trinity, the sacraments, especially the Eucharist, the Mass, the Bible, Tradition, etc.

My mistake is that my concept of names is that of a modern person with a Western background.  Think of naming babies. What comes to mind?  Some of the discussion around baby names:

1) Do both parents like the sound of the name?
2) How do the initials work?
3) Is it unique enough?
4) Is it too unique (or weird, as the case may be)?
5) Is there a family member that the child is named for?

Those are just some of the things that we think about.  The question is, do we ever really think about what a name means?  What it means to us, yes, but not what the name itself means.  Now, I'm not saying that there is anything wrong with our method of figuring out names.  I think it's fine.  It's just that looking at names in this way does nothing to prepare me for the talk I have to give next week.

In ancient Hebrew times, names were much different.  Names revealed something essential about who the person is.  To know someone's name is to know that person.  A name wasn't chosen based on whether someone liked the way it sounded. It was given because it was something about who that person was.  This is why name changes in the Bible are so significant.  Changing a name in the Bible often reveals a changing in a person's mission.  Abram became Abraham (father of a multitude) when he was to become the father of nations. Simon became Peter (rock) when he was to become the rock on which the Church was built.

Knowing the names of Jesus does not merely help us to recognize His different names and titles.  It helps us to understand who He is, and what His mission is. If we know His mission, we can see how He fulfilled it in His own life, and how He is continuing to fulfill it through us, His Church.

For almost one week, I was without internet at home.  You would think that I should have been too busy to notice, but I was not.  The funny thing is, all week I had stuff that I wanted to post on my blog, but now that I have access again, I cannot figure out what to say.  I haven't even been offline long enough for anyone to notice, but I've been off long enough for me to have a nice little block.  I don't get it.

Anyway, you may not have missed me, but I missed you!  I've been catching up as quickly as I can, but it's amazing how many big things you can miss in only a week!  I've tried to comment as much as I can, but I know it's been spotty.  I still read what you all had to say.