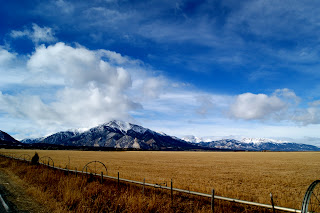 I am finding myself with not much to say.  This is unusual for me, but whenever I try to write a post or leave a comment on one of your posts, I find myself without words.  This post is to let you know that I am still reading your blogs and praying for you,  and that I will try to do better at commenting. Also to let you know that while I am still snowshoeing, I have not fallen off a cliff or gotten stuck in an avalanche (this was my mom's concern when I didn't get her called last week).
Posted by Catholic Mutt at 9:22 PM 8 comments: 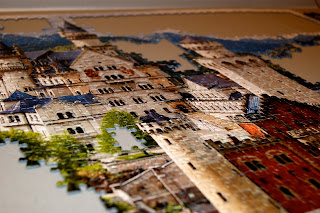 I have a feeling that someday the crazy pieces of my life will come together and make sense.
And while I really believe that, this isn't really a deep philosophical thought so much as it is an excuse to use a picture that caught my eye.
Posted by Catholic Mutt at 8:09 PM 6 comments: 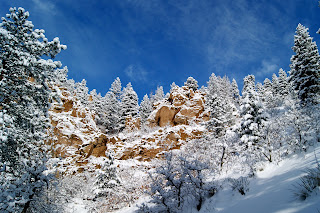 1) It's the final feast of Christmas, and guess what!  I got the definitive answers to what are the five feasts of Christmas.  It is: 1. Christmas, 2. Feast of the Holy Family, 3. Mary, Mother of God, 4. Epiphany, 5. Baptism of the Lord.  Our priest got tired of being asked from so many other people that were also in the dark, so enlightened us all with his homily today. :)
2) I've been wondering how the Baptism of the Lord fit in with the Christmas celebration, but today it made a little more sense.  We're transitioning from the celebration of His birth to the end of His hidden life.  At His baptism, He moves into His public ministry.  And we move into Ordinary Time, focusing on the teachings of His public ministry.
3) My life is a little backwards from most people's.  Most folks are ready for the holidays to be over (though it can be a little depressing) because they need some quiet time.  Not me.  For the last several years, my holidays are too quiet, so I'm glad when "regular life" starts back up again.  Actually, the quiet wasn't bad this year.  I felt like I actually got a chance to appreciate Advent, and I enjoyed having plenty of free evenings for movies.  Now I enjoy that I have a lot of things going on this week.
4) This weekend was a lot of fun, and I really enjoyed snowshoeing.  I definitely need to go get some snowshoes now, but there are so many different kinds I don't know which ones to get.  We were not on a slope where we had to worry about avalanches, but we still learned some about them.  Like learning to dig a snow pit to check the condition of the snow. 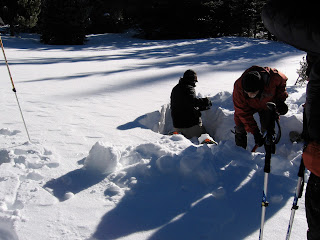 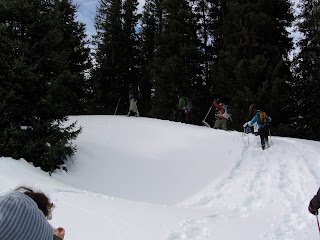 Some fellow snowshoers heading up a hill and practicing their rest step (where you stop and rest briefly with each step because it's steep.) 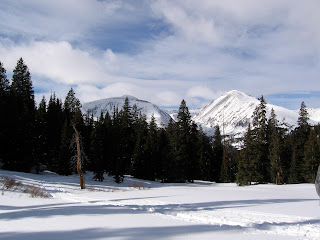 Anyway, it was a good weekend, and I'm actually motivated to try to get to the treadmill tomorrow to see if I can get in better shape for the next time.  My only disappointment was that I didn't get to try some new pictures with the new camera.  I only took the old one on the trip.  It seemed better for wallowing in the snow.  I was going to get out today, but it was snowing.  That was disappointing in regards to the camera, but exciting in regards to more snow to play in.
Posted by Catholic Mutt at 8:36 PM 4 comments:

Last night I had my first snowshoeing class.  From what I understand, learning snowshoeing is a 21 step process.

Woohoo!  You can now snowshoe!

The actual process of snowshoeing is not the problem.  It's the being safe while you snowshoe that's the problem.

1)The avalanche triad: terrain, weather, and snowpack.  (For the record, when they talked about how wind could fill up a couler, everyone nodded knowingly.  I wouldn't admit it, but I was lost until I came back and tried different spellings until Wikipedia could help.  Because of course I couldn't ask what it was when everyone else was so matter of fact about how obvious it was.)
2) Likely places to sunburn: the bottom of your chin, the inside and bottom of your ears. Because of the reflection of the snow.  Never thought of that.
3) Use a wide mouth water bottle, not a narrow one.  It's less likely to freeze shut on you that way.
4) The difference between the windward and leeward side of the mountain.  Just so you know, it's safer with regards to an avalanche to be on the windward side.
5) Snow blindness is actually a sunburn of the retinas.  Ouch!  All the burning and the itching, but nothing that you can do to relieve the symptoms.

Wednesday I get to learn about the snowshoe gear itself, then Thursday or Friday I can go broke shopping for all this stuff.  Saturday we hit the snow!  I can't wait.  And I'm glad we'll be with several instructors that know what the heck a couler is and can keep us safe while we fumble around in the snow.

(Ahem.  Note to instructors: Certain people who may get a little caught up in the rules at times would like to make sure that they have the proper "10 Essentials" gear.  When you get to the "Emergency Shelter" essential, perhaps you could be a little more specific than "bivy sack, reflective tarp, etc." "Etc."?! What the heck does that all include??  I need to know what "etc." is!! Thank you.)
Posted by Catholic Mutt at 8:38 AM 3 comments:

I'm not into any predictions or resolutions for the New Year.  Not this time.  I like resolutions and usually like to have one or two to focus on.  If anything, maybe there should be one on positive thinking... Anyway, there are certainly things that I did not enjoy about 2010 (and I would love to not have to deal with those things this year), but there were a lot of good things as well.
Here's one thing that I've been thinking about a lot in the last few days.  I wish that I could get started on some amazing volunteer project or something so that I could have more purpose in my life.  I wish that I could get fired up to read some amazing book or start some new devotional or read the Bible more so that I could get my spiritual life going more.  You know what just occurred to me?  It should have been obvious, but I guess I was searching for something that I could have control of, since I can't have control of the one thing that is most important to me right now.  I want to find a way to make my own life better.
Don't get me wrong, those are and can be amazing goals, but they were and are beyond my grasp for the time being.  Maybe it's the same thing with the resolutions.  I want to take control, but it is beyond my feeble powers at the moment.
I realized that all I have to do right now is what I can do.  I can go to Mass and I can pray Morning and Evening prayer.  I can go to work and try to do my best.  That's it.  I don't feel that I have much to bring to these prayers, but all I feel that I'm asked to do right now is to show up.  That I can do.  I get to leave the rest to Him.
The last 3 years have been something else.  2008 was ridiculous.  I hate thinking about 2008.  On the other hand, that led to some amazing healing in January of 2009.  Why does breaking have to come before healing? 2009 certainly had it's tough times, but wasn't as bad.  Not only that, but I felt that I had a very specific purpose that year.  It was small, but I felt that I was where I needed to be, doing what I needed to do.
2010 has also had its really tough moments.  I have probably 50 drafts of things that I won't publish (which are more or less the same things as I do publish; I had to write them out to let them out, even if they were too numerous to publish).  But I realized the other day that those are not going to be the only things that I remember about 2010.  I was looking through a book that I had made on my computer (I'm going to try to order it if the order form stops its goofiness).  Those pictures of all that hiking, that's the other thing that I'll remember.  Because for me, living out here has been a constant communication with Him.  His language is beauty, and mine is appreciation. Words are not needed.
Here's looking forward to 2011, whatever it has to offer.
(This slideshow is some of what I will be remembering about 2010.  I hike a lot and take a lot of pictures of mountains and more mountains- and you've already had to sit through most of them, so no need to feel that you have to watch it.  It is as much for me to remember as anything else, and I wanted to share for anyone who did want to see.)
P.S.  I cheated. The last 4 or 5 are from today, so not technically 2010.